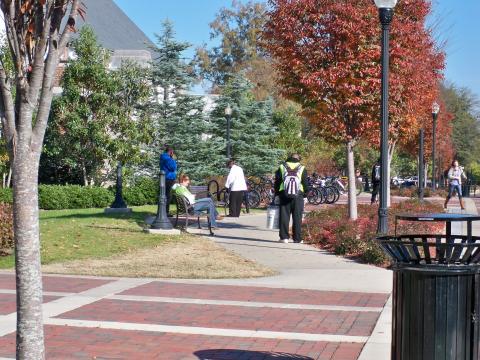 STARKVILLE, Miss.--Upgrading infrastructure and making operations more efficient are two key changes that have allowed Mississippi State University to reduce its energy consumption by 37 percent. MSU's Sustainability Committee remains committed to continuing and growing that trend across campus, said J.D. Hardy, MSU energy and mechanical engineer for the committee. Mississippi Institutions of Higher Learning created the Energy Task Force in 2006 and set a goal, by 2016, for Mississippi universities to reduce their energy consumption by 30 percent per square foot. Hardy said MSU is already years ahead of schedule, thanks to the university-wide focus on incorporating infrastructure upgrades and encouraging more efficient building operation. "For example, if you take a building that didn't have a very good means of controlling the energy consuming equipment -- like air conditioning systems or boiler systems -- and then install modern controls that allow an operator to 'program' a schedule for the operation of that equipment, it quickly reduces the energy consumption of the facility," Hardy said. Continued renovations across campus also have played a big role in lowering campus energy consumption at MSU, he said. By replacing older water boilers and chillers with more efficient ones, the university is developing effective strategies for long-term savings. Additionally, new facilities at MSU are designed and constructed with the most efficient building systems available. "We have very talented folks on campus who know how to add the right controls equipment and then operate buildings on a very efficient schedule," Hardy said. In fiscal year 2006, campus electric and natural gas consumption totaled 162,000 British thermal units per square foot, he said, but the sustainability committee and its resource-efficiency plan has decreased MSU's Energy Usage Index to its current level: 102,000 Btu in 2012. "If we had continued to use energy at the fiscal year 2006 levels from 2007 to 2012, we would have spent over $21 million more on electricity and natural gas, due to the higher rate of consumption," Hardy said. "Considering that campus grows in square footage every year and energy rates go up every year, it is increasingly important that we lower our Energy Usage Index as much as possible every year." As university leaders look to future sustainability initiatives, consumption-reduction efforts will focus more on education through ECO PAW, a campus wide energy education and assessment program, said Jeremiah Dumas, director of the Office of Sustainability and vice president of the sustainability committee. "With 5,000 faculty and staff and over 20,000 students, it is imperative that we educate all the people of this campus so that they can help us reach our goals with every decision that they make," he said. "This includes operations and daily decisions in their offices, their procurement guidelines and standards, as well as their travel and transit behaviors." Hardy agreed and said the real challenge lies in changing people's habits, and correspondingly, that kind of change could make the greatest impact on reducing consumption across campus. "The savings that can come from encouraging people to make the best energy decisions can easily have more impact at a much lower price tag than any type of equipment upgrade," he said. "If everyone turned their office equipment and lights off when they weren't using them, and if everyone raised the cooling set-point or lowered the heating set-point a couple of degrees, I imagine I would be getting a call from the power company wondering what was going on at MSU." Along with continuing system upgrades, other continuing energy consumption-reduction initiatives include upgrading obsolete and inefficient lighting systems with longer lasting and more energy efficient systems and developing an "Ice Storage Plant" to produce ice at night during summer months to use to meet the campus's chilled water needs during the day, Hardy said. "The administration has allowed facilities to spend money on upgrades with the understanding that it is a business decision with a very attractive return-on-investment," he said. "By funding these upgrades and by letting our MSU folks execute energy upgrade projects, we have leveraged our in-house resources to improve our facilities at the best possible value." Hardy said, administrative support, as well as continued promotion of sustainability initiatives across campus, will allow MSU to continue its mission of reducing energy consumption.