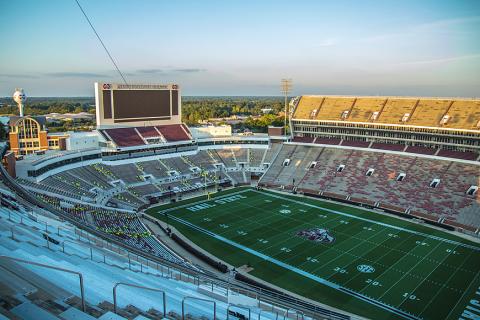 STARKVILLE, Miss.—Mississippi State’s achievements on the football field have once again risen to a top national ranking – with the latest honor recognizing the grounds crew that has bolstered the quality of Scott Field at Davis Wade Stadium to perennial national prominence.

The Sports Turf Managers Association is recognizing Scott Field as the Football Field of the Year for colleges and universities with natural playing surfaces. A panel of 15 judges independently scored entries based on playability, surface appearance, utilization of innovative solutions, effective use of budget and implementation of a comprehensive agronomic program.

For winning, MSU’s Sports Turf Facilities Management team will be honored at the STMA annual awards banquet Jan. 22 in San Diego, California, and Scott Field will be featured in SportsTurf Magazine.

“It is an honor to be recognized nationally by this organization, and it is a credit to those who work diligently to keep Scott Field in such impeccable quality,” said Vice President for Campus Services Amy Tuck. “Their work and attention to detail means so much to the entire university family and everyone who enjoys seeing the Bulldogs play.”

Scott Field, which also won the award in 2003, is one of two university fields to earn the honor twice, along with the field at Iowa State.

“This is a driving force that we shoot for every year,” said Brandon Hardin, superintendent for Sports Turf Facilities Management at MSU. “It’s a fantastic honor, and it’s been a goal of mine since I started here to win this again. The athletics and campus landscape departments have shown a commitment to giving us what we need to produce these kinds of awards.”

Hardin joined the Sports Turf Facilities Management staff as a student intern in 2003 and returned as assistant superintendent in 2008. Last year, he was promoted to superintendent, leading a staff of one assistant and six student workers to manage all the university’s natural athletic playing surfaces. He will accept the award next month on behalf of MSU.

All the university’s athletes play on Bermuda-based surfaces, Hardin said, with his crew over-seeding with rye grass in the fall. That keeps the fields green during cold weather when Bermuda grass is dormant, and it saves hundreds of thousands of dollars per year compared to annually ripping out the old grass and re-sodding.

Hardin said his crew mows Scott Field every day during the summer and about three times per week during football season. It uses an average of more than 300 gallons of paint per week for field striping, which is virtually a year-round project, he added.

Since 1992, STMA’s Field of the Year award has honored members who manage a variety of sporting grounds at the professional, collegiate, schools (K-12), and parks and recreation levels.

“Each year, we look forward to hand-picking the best natural grass athletic surfaces in the country through the Field of the Year award,” Kim Heck, CEO of STMA, said on the organization’s website. “With a record number of applicants in 2015, the selection process has become more vigorous, which serves as a testament to the high-quality fields our 2,600-plus members produce across the U.S.”